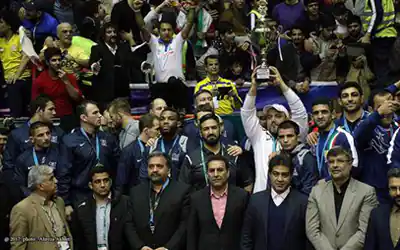 Fans rose to their feet again to start an even louder chant four matches later.

“Jor-dan, Jor-dan,” they called out as Olympic and world champion Jordan Burroughs took the mat.

This kind of enthusiastic support isn’t totally unheard of for an American wrestling team.

But this didn’t happen in the United States.

It happened halfway around the world in a country considered anything but a close American ally.

That didn’t matter to the wrestling-mad fans in Kermanshah, Iran, who eagerly awaited and warmly welcomed the U.S. contingent with open arms for the Freestyle World Cup on Feb. 16-17.

“The Iranians were amazing, just amazing, the way they supported the Americans,” said American Team Leader Hooman “Mo” Tavakolian, who moved to the U.S. from Iran when he was 8 years old. “They love wrestling and they love having the American wrestling team in Iran. It was an awesome environment for the U.S. athletes to compete in.”

Welcome to the world of international wrestling, a sport that transcends political and cultural barriers while truly bringing people of the world together.

A trip that almost didn’t happen because of U.S. travel bans and political unrest became a reality in large part because of the strong bond and relationship the U.S. and Iran have developed in the traditional Olympic sport of the wrestling.

Wrestling is the national sport in the Islamic Republic of Iran and they love having strong American teams come to their country to compete.

Iran has long been a wrestling powerhouse at the Olympic level.

The Iranian fans are some of the most passionate, hard-core and knowledgeable in any sport, and they loudly backed the U.S. in its first three wins of the World Cup, including a win over Russia.

Tavakolian also served as a liaison and interpreter for the U.S. during the trip. With his involvement in bringing the U.S. and Iran together in wrestling, Tavakolian has become well-known in his native land.

He has built a strong relationship with the wrestling federations from both countries.

Fans in the stands held up a photo of Tavakolian during the World Cup.

“It was a huge honor for them to recognize me,” he said. “It is a privilege for me to be able to be involved in wrestling, and be able to help in any way that I can. I am very proud of my heritage.”

The USA-Russian dual was another example of how wrestling bridges gaps between nations despite political differences.

“It was a good, hard-fought wrestling match,” Tavakolian said. “The Iranian fans were very vocal, chanting ‘U-S-A, U-S-A’ during the dual with Russia. It was a great atmosphere.”

The U.S. advanced into a much-anticipated finals dual against Iran, which defeated the Americans 5-3 in an exciting, competitive meet. Horns blared, drums were pounded and chants went on throughout the dual as the raucous Iranian crowd cheered on their beloved wrestlers.

The teams shook hands before and after the dual, and there was great sportsmanship and fellowship between Iran and U.S. during the match.

Even though he beat an Iranian, Burroughs was cheered again by fans from Iran after he earned a close win. The Iranians appreciate great wrestlers and they know Burroughs well after he beat wrestlers from Iran in the finals of the 2012 Olympics, as well as the 2011 and 2013 World Championships.

Burroughs waved to acknowledge the cheering fans before slapping the hands of Iranian fans who leaned down over the railings from the first row of the stands after he came off the mat.

Burroughs received the same type of “rock star treatment” on this trip that he did when the 2013 World Cup was staged in Iran. He is more recognized in Iran than in his home country.

“In Iran, we are treated like heroes and that’s really great to see,” he said. “The fans here are tremendous. They love wrestling and we love to compete here.”

American Kyle Snyder, an Olympic and world champion, also received a warm welcome from the Iranian contingent even after he defeated a wrestler from Iran.

“Every Iranian I have ever come in contact with has been extremely respectful and extremely polite,” Snyder said. “The fans cheered for us and wanted to take selfies with us at the World Cup. They treated us great. The atmosphere was awesome to compete in.

“This was the best tournament I have ever participated in, even better than the Olympics in Rio.”

The American contingent was treated “like kings” the entire time they were in Iran, Tavakolian said.

The U.S. team departed for its trip to the World Cup on Feb. 12. The team flew together from Frankfurt, Germany to Iran and initially landed in Tehran at 1 a.m. local time on Feb. 13. Each member of the American delegation was presented with roses and then the group was taken to a VIP lounge while their luggage was transported for them.

The American team then joined the Iranian national team on a chartered plane for a 45-minute flight to Kermanshah.

“It is an old, historic city that is only about 165 miles east of Baghdad (Iraq),” Tavakolian said. “There was so much security around us and we had a police escort. I felt safer there than I do in New York City at times. They were going to make sure we were completely safe and we were. There was no hostility or any sign of any negativity toward the Americans. We felt very welcome the entire time we were there. Everyone was very nice and respectful. The Iranians were great hosts for us.”

After the event, the American team had an opportunity to sightsee in Tehran. They visited the Milad Tower, a beautiful landmark similar to the Space Needle in Seattle, that features spectacular views of the city of nine million people.

“This was my fourth time going to Iran with an American group for wrestling, and this was by far my best experience,” Tavakolian said. “We weren’t even sure we were going to be able to go until the last minute because of the travel bans, but we managed to pull it off. It showed the kind of unity that can exist between people and countries. This went above and beyond a wrestling match.”

Iranian teams also have wrestled in the U.S. numerous times, including the 2015 World Championships in Las Vegas and World Cup appearances in Los Angeles in 2014, 2015 and 2016.

Tavakolian has played an integral role at many of those events. The words of former world leader Nelson Mandela, who was an athlete himself, inspire Tavakolian.

“It is more powerful than government in breaking down racial barriers. It laughs in the face of all kinds of discrimination.”

Tavakolian said those are words he lives by.

“Wrestling diplomacy is rolling up your sleeves and hitting the ground running,” he said. “It’s opening the channels of communications, and understanding the cultures, the political landscape and the challenges we face.”

The 2017 Freestyle World Cup certainly brought the world together for an important international sporting event, even in a time of political turmoil and unrest around the world.

“It was just an incredible display of what the human spirit is all about,” Tavakolian said. “Even with all of the differences we have and the obstacles we face, wrestling showed how well we can all get along and how powerful of a force athletics can be in bringing that about.”

Rasoul Khadem, president of the Iranian Wrestling Federation, wanted to make sure the U.S. was part of this event.

“A World Cup without the Americans,” Khadem said. “would not have been a real World Cup.”

Effort to restore wrestling club destroyed in Afghanistan terrorist attack has begun, but more help is needed to complete task

The Reopening of the Maiwand Wrestling Club: “The Glass only gets sharper after being broken”